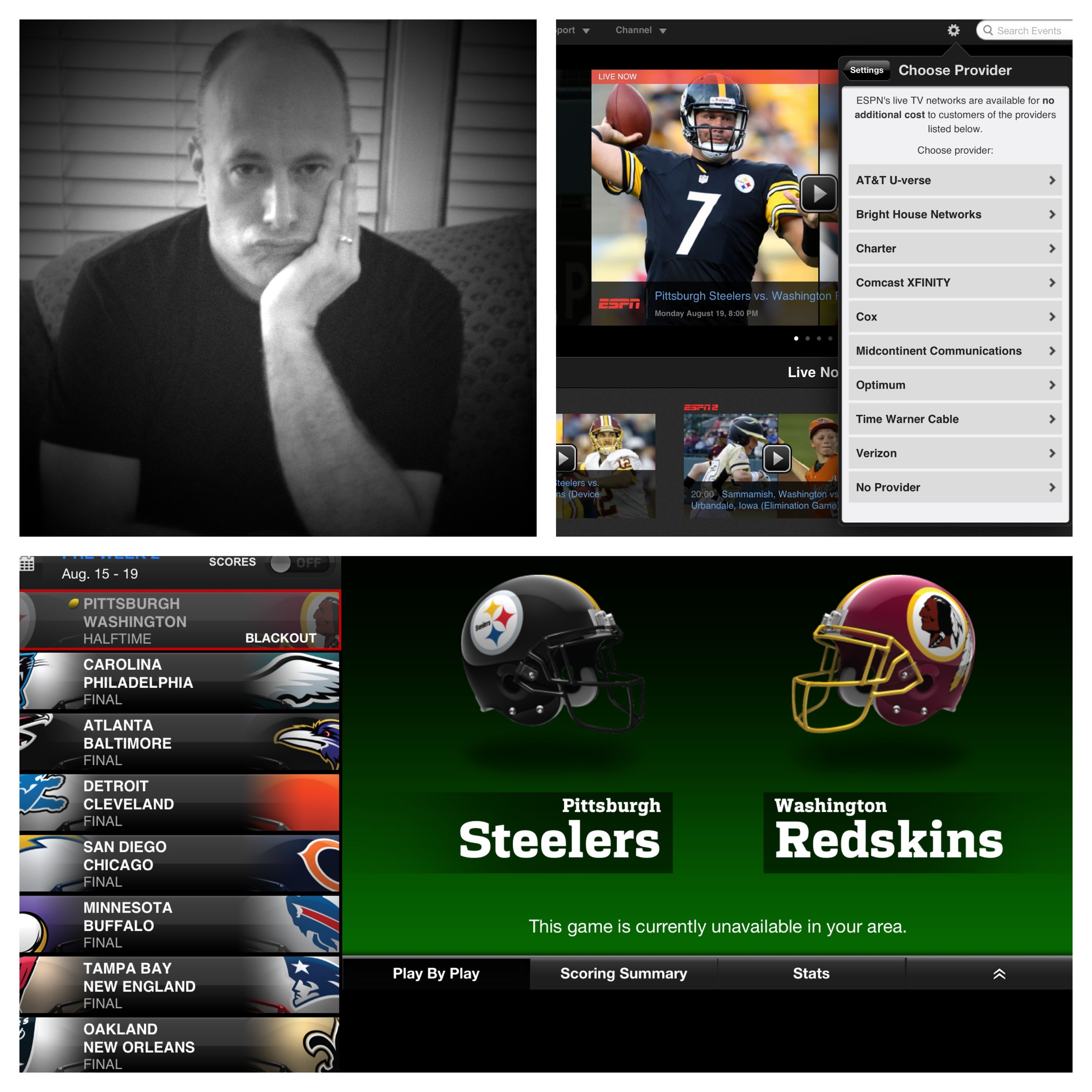 (NOTE: This post was translated into English from Pittsburghese.) So whilst trying to watch my Beloved Pittsburg Steelers tonight, I ran into a perfect example of businesses unable to deal with the rate of change in the market and as a result leaving money on the table.

Situation: Many, many, many Americans (and folks in other nations) have “cut the cord” on cable for video-on-demand (VOD) and Live-Streaming of their favorite shows. This trend has been accelerating thanks to devices and HDTVs with built-in apps such as Netflix, Amazon Prime, NFL Live, ESPN Live, and Hulu+ and the gradual increase in bandwidth available to houses. If my numbers are anywhere near correct, we reached the Tipping Point and LiveStreaming/VOD went mainstream about 6-9 months ago.

So I go on to ESPNLive on my computer and find I can’t watch tonight’s Pre-Season Game against the Washington Redskins because I am no longer affiliated with any of the contracted cable providers. No, worries… I have technology! I fire up WatchESPN on my Verizon-locked Apple iPad 3. Nope… can’t watch the game there either. So I head over to my NFL Preseason App. Nope… because ESPN has the game on, I get the dreaded “Blackout” status. Fearing no hacking, I fire-up my encrypted proxy connected to a server far west of Washington DC and Pittsburgh only to find I am still in a Blackout zone because ESPN is carrying the show on cable providers nationwide. No Steeler Nation love for me.

So what is going on in this situation?

I watch the compressed version of the Carolina Panthers tragedy on the NFL Preseason Live app (with no ads but $15 subscription to the NFL for the preseason) while running on the treadmill.

There are a number of possible reasons behind this. My money is on the following combination:

Executives should look at this case study and realize the importance of Organizational Agility. The solution for the NFL, ESPN and/or the cable distributors is simple… change your business model, change your organizational structures, policies and procedures to embrace being able to change your business model every 6-9 months. (Yes… I just said that.) If cable distributors were savvy, they would be allowing me to buy entire cable packages, without the cable, to compete against encroaching upstarts like Hulu+ and Epix (owned by media giant Viacom). If media providers like ESPN were savvy, they would have a subscription model as an alternative to their cable distributors. If content creators and owners were savvy, they would go direct to the consumer with their own subscription or PPV models.

So how do business executives shift so quickly? Use Lean Startup in the Enterprise and Agile Product Development as organizational models, not processes. If they can’t figure this out, they should look to firms like ResultLinq Associates, LLC

to coach them through the transition.

No matter what, don’t leave money on the table.